I am now 17 weeks along.  According to What to Expect When Expecting, my baby is the size of a sweet potato.  I’m now at the point where I can still button my regular pants, but they are very tight. For some weird reason, I feel like my stomach gets bigger during the day, and then flattens out again at night while I am sleeping.

I realize that to anyone who doesn’t know me and doesn’t know that I am pregnant probably would never look at me and say, “She’s pregnant.”  It really probably just looks like I ate a little too much over the holidays.  But here is a side-by-side comparison.  The first picture was taken on our anniversary when I was 11 weeks.  The second picture was today at 17 weeks. 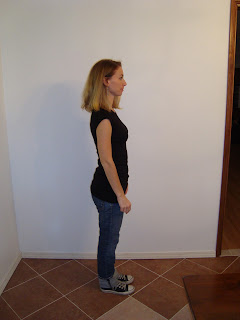 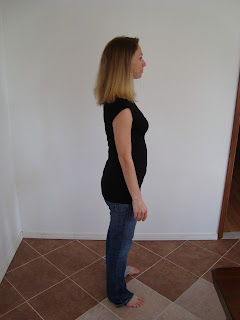 It is funny, though, because last weekend, I went to a baby shower on Saturday and a bridal shower on Sunday.  At the baby shower, my friend, the honoree, told several of her friends that I was also pregnant, and they all looked at me and said, “Really???”  The next day at the bridal shower, the sister of the bride (who is like a sister to me too), greeted me at the door and said “Oh, cute little baby bump!”  So yeah, I think it depends on who knows me (and knows what I normally look like), and it also depends on what I’m wearing – some clothes highlight my slight bump a little more than others.

I’ve been wearing this wonderful thing called a BellaBand.  It’s basically a piece of fabric (very similar in size and material to a bandeau bra), which I can wear over my unbuttoned pre-maternity pants, and it will hold them up and smooth them out.  I also bought my first couple pairs of maternity pants.  My friend took me to her favorite consignment maternity store, Baby Go Round, in San Diego.  This place was amazing!  I bought one pair of slacks, one pair of jeans, one shirt, and a dress, all for $30!  The pants were on average about $8, which is far better than $30 for brand new pants at Target or wherever. No wonder it’s my friend’s favorite store!  There’s no point in spending lots of money on clothes you can only wear for a couple months.  Now I just need to find a place like it in LA!
Posted by Brenda Stevens at 8:09 PM