A couple days before Christmas, I got a rather frantic call from a specialty ultrasound office that had received a referral from my doctor.  They needed to schedule the NuchalTranslucency Ultrasound immediately.  The NT Ultrasound, used in conjunction with blood tests, can give an indication of the likelihood of Down syndrome.  My doctor would be out of town for the holidays, and apparently this ultrasound needs to happen between 10-13 weeks because that is the only time the doctors can see through of the nuchal fold (near the base of the neck).  The one disadvantage to fast forwarding the pregnancy by 4 weeks meant that I was already 12 weeks by the time were scheduling the appointment, so we only had one week to spare in getting this ultrasound done.  Fortunately, we were planning on spending the entire week between Christmas and New Years at home, and not going out of town (for the first time . . . well, ever).

I thought it would just be a quick ultrasound to determine the likelihood of Down Syndrome . . . but it was so much more than that!  They used that fun 3D technology.  I had no idea that the images could be so detailed this early on!  The doctor was able to see all five fingers and toes on each appendage.  He pointed out the kidneys and the heart, including all the ventricles.  He showed us the bones forming in the arms and legs. And, the most emotional moment (for me anyway) was when we got to hear the heartbeat for the first time.  I actually shed a tear when I heard it.

Also, it turns out that the doctor we saw is a former professional dancer (ballet dancer . . . what is the male version of “ballerina”?  I can’t ever remember).  He told me that I could still take class as long as I was comfortable and to be sure to listen to my body if it was getting exhausted.  The one major thing to be careful of, he said, is not to push my extension.   Apparently the ligaments loosen significantly, so I could injure myself if all of a sudden I push the extension and try to lift my leg too high, thinking it’s “real” extension and not “pregnancy” extension.  Though, I have to say, so far, I think my muscles are tighter than normal, so I haven’t had the chance to experience “pregnancy” extension yet.  J

Here is the full slide show we got to take home! 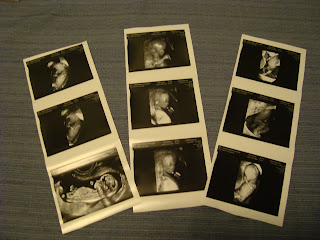 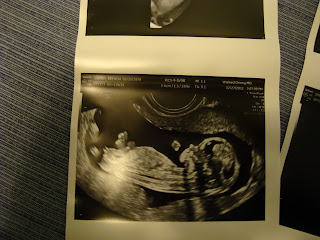 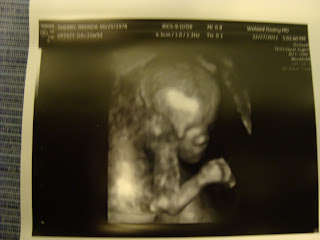 We like to call it our alien child because, well, it kind of looks like an alien at this point in time.

Oh, also, the doctor said the likelihood of Down Syndrome is very low, so we don't need to worry about any additional testing for that at this point.
Posted by Brenda Stevens at 12:00 AM