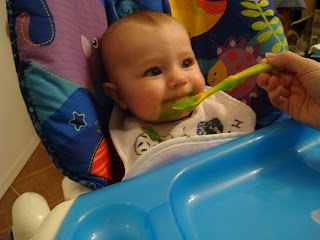 I can’t believe we are almost done with January!  I’ve had this blog post in my head for the past month . . . but then all three of us got a wretched cold that knocked the entire house out for a couple weeks.  If you’ve never had to deal with trying to get a sick baby to go to sleep, you are very lucky.  It is not fun!  Finally all three of us are feeling better – we had lingering coughs and congestion for the longest time!

A couple days after Guinevere turned 6 months, we decided it was time to start “solids.”  I put that in quotation marks because somehow purees don’t really seem like solid solids.  Like most babies, Guinevere’s first taste of non-breast milk food was rice cereal.  She didn’t quite know what to make of it. She seemed really excited to put the spoon in her mouth, but then she tasted the cereal and I don’t think she understood that she was supposed to swallow the stuff that was on the spoon.

Here is a video of Guinevere's first bite of food.

Her second food was peas.  I made the pea puree myself from real peas, which I thought would taste much better than the jarred stuff.  It tasted good to me, but Guinevere just thought they were “ok.”  But then again, she still didn’t totally understand that she was supposed to swallow them.  She would “eat” them off the spoon, but then they’d just come right back out and get all over her face and bib.  A couple days later I tried giving her peas from a jar, and she seemed to like that much better . . . or maybe it was just that she was finally starting to understand that she was supposed to consume them.

In addition to the purees, we are also incorporating some Baby Led Weaning techniques.  Baby Led Weaning is a method of introducing your baby to solids without any purees whatsoever.  You just give the baby finger foods from the beginning and let them feed themselves.  It’s kind of neat!  Since we are not fully doing BLW, our general schedule at home is that we feed her a puree while our dinner is cooking.  Then once dinner is ready, we pull her high chair up to the table so that she can join in.  Then we give her finger-length sticks of foods that are appropriate for her at this point in time.  Usually I will put them on my plate first and then give them to her so that she feels like she’s participating in the same dinner.  She’s had carrots, squash, bread, cucumbers, green peppers, green beans, chicken, etc.  So far her favorite finger foods are bread and cucumbers. So far it seems that she likes everything we’ve given her.  She loves carrots (pureed and cooked finger food) and cucumbers (finger food).  I think the cucumbers feel good on her gums because they are so cool.  The only thing she doesn’t seem to like is sweet potatoes – which isn’t that surprising considering neither Aaron nor I like sweet potatoes.

Now that we’ve been feeding her for a couple weeks, she seems like she’s finally getting the idea that she’s supposed to swallow the food on the spoon.  In fact today, she ate all of the oatmeal and pears that I prepared for her!  Last night she actually bit off a piece of bread and swallowed it!  It’s so amazing to watch this little person start to form opinions about food and begin to understand the technique of eating (who knew there even was a technique to eating?).
Posted by Brenda Stevens at 6:24 AM No comments: