My apologies for the long hiatus from blogging.  But at least I can say I have good reason (which most of you know already, since I think there are maybe 5 people who read this blog that are not my fb /real lifefriends) . . . I’m pregnant!

I am currently 17 weeks pregnant with baby #2!  The due date is May 21 (or 22, depending on which ultrasound you believe).  Guinevere will be about 23 months when this baby is born, so they’ll be almost exactly 2 years apart.

For those of you who are wondering, no, this one was not exactly planned. (It’s amazing how many people have asked this question – a minuscule snarky part of me wants to respond, “You really want to know that much about my sex life?”)  It’s kind of funny, though, G was so planned.  When Aaron and I got married, we told people we would wait 5 years before having kids.  Five years later (almost exactly), we announced that we were expecting!  When it came time to having a second kid, Aaron and I had no idea what the timing should be.  We hadn’t really thought that far ahead.  We knew for sure that we wanted 2 kids, and it seemed like 2 years apart would be a good age difference – it seems kind of standard almost (you should see how many of my fb friends are now pregnant with #2 who also had babies in 2012!)  In fact, we literally had just started seriously discussing having another one and then . . . BOOM.  Pregnant.  So like I said, not exactly planned . . . but not completely unplanned either – if that makes any sense.

The one nice thing about the timing of this pregnancy is that, assuming this kid isn’t late, I will be done having kids while I’m 35.  The downside is that I’m already 35; so all my medical paperwork is stamped with “advanced maternal age” (AMA).  Ha!  The nurses warned me about that ahead of time and told me not to freak out – especially since I’m exactly 35 (right at the cutoff for AMA).  Definitely glad they warned me, though.  Since I am 35, we had to meet with a genetic counselor and go through all of the risks associated with having a kid “later in life” and discuss the various tests that were available to us.  Fortunately, they now reserve amniocentesis for high-risk situations where you’ve already had bad results on earlier much more non-invasive tests.  Many of the tests are the same as before – basic blood work, NT scan, etc.  But there’s a new test that Kaiser has recently adopted where they draw blood and look for the risk of any chromosomal abnormalities.  A byproduct of that test is that they can tell the gender as early as 10 weeks!  So yes, we know the gender already.  We’re not really spreading it around yet, though – but if you ask me really nicely in person, I might tell you.

How am I feeling?  Exhausted!  I thought I was tired when I was pregnant with Guinevere . . . that was nothing compared to the exhaustion of being pregnant AND chasing after a toddler!  Plus, I’ve had a lot more nausea this time around.  With G, whenever I would feel a little nauseous, I could just eat something or have a glass of milk and the nausea would subside.  This time around, eating doesn’t really seem to help.  Now that I’m in my second trimester, most of the “morning” sickness has dissipated (morning = a wave in the morning, a wave in the afternoon and a wave in the evening).  I’m still getting some nausea at night, right before bed, when my exhaustion is at its peak.

And that, my friends, is the major reason for the delay in my blogging.  Every night when I say I’m going to write something, I put G to bed, sit on the couch and fall asleep (or lay there in a ball not feeling good until I eventually fall asleep).  I really shouldn’t complain too much – I’ve had friends who have had much worse pregnancies than either of mine.  It’s really not that bad.  It’s just that I’m not used to having no energy and it really throws me for a loop! 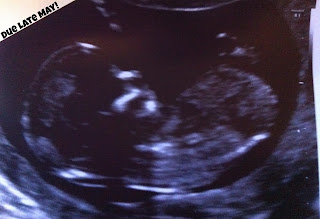 Posted by Brenda Stevens at 11:44 AM No comments: