Guinevere is 10 months old now!  Can you believe it?!  I know I can’t.  Her first birthday is only 2 months away.  Now I can start planning that birthday party for real!  (Though, really, I mostly have it all planned in my head anyway . . . note to self: pester Aaron to get the back yard in semi-decent order so that people don’t mind hanging out back there.)

I know there are a lot of women who miss the newborn stage once their baby outgrows it.  I am not one of them.  I’m loving every new stage that Guinevere enters.  And with each new stage, I fall even more in love with her.  I love watching my baby grow and become more and more aware of the world around her.  I love watching her acquire new skills every day.  Speaking of skills – even though Guinevere has not mastered crawling forward, she has become quite accomplished in crawling in a circle and rolling around to get whatever she needs/wants.  She also has learned to use “tools.”  We’ll put a toy just out of her reach, like all the books say to do, to try to get her to crawl forward towards it.  She’ll look at the toy, reach her little hands out and try to get it.  Once she realizes she can’t quite reach, she will roll over to another toy (usually her remote control toy, or the edge of our alphabet mat), grab the toy that she can reach and then use it to move the toy that was out of her reach closer to her.  The first time she did that, we were sort of impressed/amazed.  Aaron said to her, “work smarter, not harder.”

Here's a video of G puling out one of her "tools"

Here's a video of G crawling in a circle.  This was taken a week or two ago, and she's now much faster at it!

In addition to (almost) crawling, I think she said her first word today.  This morning, she looked right at Aaron and said, “Daddy.”  And then Aaron said, “yeah?”  And she said, “yeah.”  She’s been saying “dada” for a while now, but it never seemed to have any meaning specific to Aaron, it’s just her favorite consonant sound to make.  She’s always been really good about being able to use a combination of “da” and pointing or indicating to let us know what she wants/needs.  But this was the first time where (I think) there was real meaning behind what she was saying.  She said, “Daddy” again tonight at dinner.  I think she also likes our reaction when she says it because, of course, Aaron and I get super excited, which then makes her excited, which makes all of us excited.  So what do you think?  Should we count “daddy” as her first word?  Or wait until she says something else?

Guinevere is also testing out other new sounds.  The other day, I handed her a stuffed animal tiger that my sister gave us and said to G, “This is a tiger.”  Guinevere said, “didar” – I swear it sounded like she was trying to say “tiger.”  She also says, “ca” when I point out the cat on a semi-regular basis.  Of course, getting her to repeat anything is an exercise in futility.  Immediately after some brilliant breakthrough, you’ll say “Guinevere, can you say [fill in the blank]?”  And she’ll just respond, “dadadada zerbjeoanuiheret.”  She’s also started to say, “nana” and “wawa” (just the sounds, no meaning attached to them).  Still waiting on “mama” . . .

Posted by Brenda Stevens at 6:28 AM No comments:

The last time I spent $100 on diapers, I thought to myself, “there has to be another way.”  And of course, there is – cloth diapers.  Then I thought to myself, “Can I really do this?”  Cloth diapering seems like such a daunting task, filled with laundry and leaks and things.  But if it will save me some money, and help save the Earth at the same time, I'm game to try it.  So I took to the internets to do a bunch of research.  I only have one friend that I know who cloth diapers, so I reached out to him for some real life advice.

Here’s what I found out: cloth diapers have evolved a LOT since my sister and I were kids!  Yes, there are still the regular prefolds (which most of you have probably seen/used as burp cloths) that require a cover (aka rubber pants).  But you no longer need pins.  There are these crazy devices called “snappis” that hold the diaper on under the cover.  And the covers are surprisingly cute these days.  Better than that, there are all kinds of new-fangled cloth diapers that are even easier to deal with than the prefold/cover option.

Here are the current modern cloth diaper offerings:
I knew that if I was going to convince Aaron to join me in this experience, I would need to choose the easiest method possible.  But then, I wasn’t sure what the easiest method was.  I did know it probably wasn’t the prefold/cover option, though.  Fortunately, there are loads of cloth diaper stores online that offer trial programs.  In these programs, you can order a bunch of diapers, use them, and then return whatever you don’t like for either a refund or store credit (depending on the program).  After much research, I ended up ordering from Sweet Bottoms, mostly because I could choose the diapers I wanted to test out.  From their trial program, I ordered Flip diapers (AI2), Bum Genius (pocket and AIO), Grovia (AIO).  I also ordered a pair of Kawaii diapers from them, even though they didn’t qualify for the trial program.  The Kawaii diapers are on the cheaper end for pocket diapers and I had heard good things about them.  I also ordered 2 pairs of gDiapers (AI2) directly from gdiaper.com – mostly because they were super cute, and they seemed like a good gateway into cloth diapering.

We’ve used our cloth diapers for two weekends now, and I have to say, I really like it.  When I was pregnant with Guinevere, I considered cloth diapering, but I was so overwhelmed with all other things baby that I dismissed the thought very quickly.  Maybe it’s my inner hippie, but somehow cloth diapering just feels right to me.  If either Aaron or I were stay at home parents, I might consider doing it full time.  But you’re supposed to wash cloth diapers every other day in order to cut down on any ammonia/smell build up.  Committing ourselves to doing laundry during the week seems like it would be an exercise in futility.

As we venture down this path, I will try to give reviews on each individual brand and let you know which I like and which I don’t like.  I’ll also give any cloth diapering tips that I learn along the way.

If you’re anything like me, you probably have a bajillion recipes pinned on Pinterest . . . and you’ve probably never made any of them.  I decided this weekend to change that.  I’m hoping to make at least one Pinterest recipe per month, mostly so I know that I’m not pinning in vain.  I know, once a month isn’t that often, but I have so many amazing cook books as well as recipes that I know by heart, that I think once a month is the most I can realistically manage.  Who knows, maybe I can make it once a week . . . but probably not.  I’m lucky to get two recipes made per week!

This morning, I made this red pepper and goat cheese strata.  It turned out delicious, if I do say so myself.  Guinevere certainly seemed to like it.  Aaron is funny about dishes like this.  Anything that’s a baked egg dish, he calls a quiche . . . and he always mentions that he “doesn’t really like quiche.”  But then, he always goes back for seconds!  I especially find it amusing because Aaron LOVES eggs, and I am not really an egg fan, but I liked this dish more than he did.  Part of it has to do with the goat cheese.  I LOVE goat cheese!  Aaron found it a bit too strong for his taste.  I’m sure it could be done with a milder cheese than goat – maybe feta or something like that.  I actually think the recipe might be even better with some thinly sliced potatoes in it – almost making it a gratin.

Here’s how mine turned out: 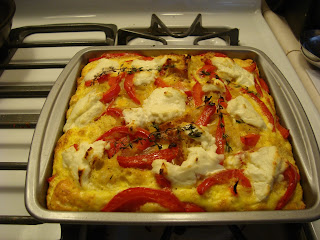 It looks pretty close to the original picture, right?

The recipe itself is pretty simple.  You beat the eggs, milk, Parmesan and some salt & pepper and then toss the bread with it and then put that in a greased 9x9 baking dish.  Meanwhile you sauté the onion, pepper, and thyme and then layer that over the bread/egg mixture.  Dot the dish with the goat cheese and then top with some sprigs of thyme to make it look pretty.  Bake at 400 for about 30 minutes.

And, it was way cheaper than eating out for brunch.  Here’s the cost breakdown:

I actually cut it into 12 pieces, but Aaron and I both ate 2 pieces (G ate one piece), so I think it’s really more a 6-serving dish.  Perhaps if you had more at the brunch in addition to this dish, you could get away with making one batch for up to 12 people.
Posted by Brenda Stevens at 10:09 PM No comments: