***Fair warning for everyone who reads this, I will be talking about bodily fluids and internal ultrasounds.  If you don’t want to know, don’t read this entry.  :) *****

We went in for our first ultrasound today, which was also our first time meeting our doctor.  Obviously, I was a little nervous . . . and excited.  (For those of you who know my musical theatre background, just imagine Little Red’s song from “Into the Woods” circling round and round in my head, and it describes exactly how I’ve been feeling this whole time “excited and scared.”)  Aaron and I left the house really early because I get incredibly nervous at the doctor’s office in general. The last couple times I’ve gone in, they had to check my blood pressure twice because the first read made it look like I had blood pressure, but it was just nerves and running from the parking structure because I’m super paranoid about being late.  Maybe by the time this whole thing is over, I will stop getting so nervous just because the doctor will seem so familiar . . . but knowing me, I will probably remain high stress regardless.

Aaron and I were shown into the examination room, and the ultrasound machine was already there.  I stared at it and got a little scared just looking at the size of the probe.  For those of you who don’t know, the first ultrasound is an internal one – i.e. there is a probe that they insert so they can see the fetus because, at this point, it is way too small to see through the ab muscles . . . especially my rock hard ab muscles (lol).

The doctor walked into the examination room and said, “This must be your first time.  I can tell by the look of excited anticipation on your faces.” I instantly liked him.  He also joked with Aaron that it would be “dad’s turn next.”  We got the ultrasound started, and I was a little confused.  I was expecting to see a little bean shaped blob, like I had seen in so many of my friend’s first ultrasound pics.

Instead, we saw this: 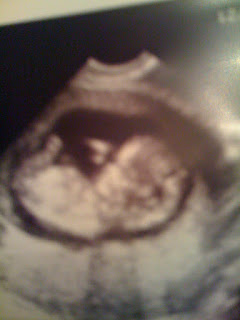 (forgive the photo quality - this is actually a picture of the ultrasound taken with my iphone and then emailed to my computer.  But I swear, in the real life picture, you can almost make out the face!)

It looked like a baby!  The doctor then informed us that we were not 7 ½ weeks pregnant, like I had thought, but 11 ½ weeks . . . soooo, I was off by an entire month!  Oops!  What we thought would be an August due date, turned out to be July 7 based on how big the baby was at that ultrasound.

Of course, our minds then went to everything we did during that month we didn’t know we were pregnant, and wondering if I did anything dangerous for the baby, not knowing I was pregnant.  Fortunately, my lifestyle is such that I don’t really have to worry too much about that.  I don't smoke, drink only occasionally, and don't engage in dangerous activities on a regular basis.  I think I had a drink or two at Halloween, but that’s about it.  But it does turn out that I performed en pointe when pregnant (which is something I kind of always wanted to do).

Next up: telling the parents.
Posted by Brenda Stevens at 12:27 PM