Well, I made it under $30 for consumption for the week . . . of course, I had a stomach bug yesterday that caused me to eat nothing but a piece of toast.  I’m guessing that next week I will hit almost exactly that $30 mark.

I actually took pictures of every single meal I ate this week.  Then when I sat down to edit the pictures, I thought, “Do I really want to edit 35 pictures of my food?  Would people really want to see that?”  I mean, really, do you need to see a picture of my cereal and tea each morning (my breakfasts are almost always the same: cereal or oatmeal with coffee or tea).  Anyway, I decided against that and I will only share one picture per day with you.

Here’s what I ate: 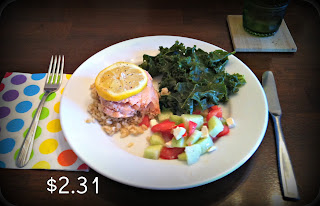 Those of you who knew me growing up may be shocked that I made, let alone ate, salmon.  But I did, and it tasted delicious!  This is one of the only ways I will eat fish.  I got the idea from Pinterest.  You just put the salmon in tin foil with some butter, lemons and salt & pepper and then bake it.  Mmmm! 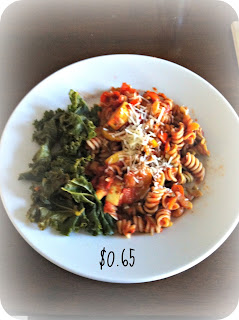 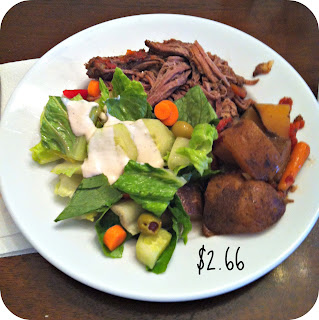 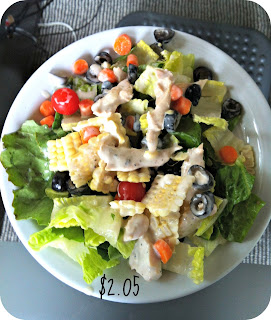 Unfortunately, my newfound appreciation for fish does not extend to leftover fish.  Blech.  Neither G nor I seemed to like it very much and we ended up throwing most of it out.  But I still have to account for it as though I ate the entire thing.  I would think that maybe it’s what set my stomach off on Saturday, but (knock on wood) G seems fine and she ate it too. 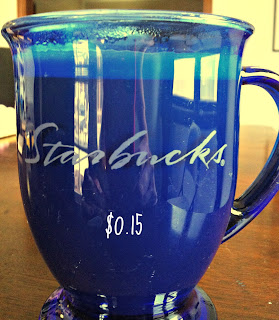 I think the hardest part about this challenge will not be the grocery budget.  It will be not eating out at all for an entire month.  On Friday, I really wanted to stop by Starbucks and get my favorite: Caramel Machiatto.  But instead, I made myself a mocha when I got home from work.  Now that I see the cost difference between what Starbucks charges and what it costs me to make it, I think I will be able to talk myself out of going to Starbucks a little more often! (though I will admit, it’s nice not to have to clean up after myself)

Saturday I was sick as a dog.  I literally ate ½ a piece of toast and a couple sips of chicken broth.  My grand total for the day was $0.18.  There are no pictures to share with you because it was that meager. 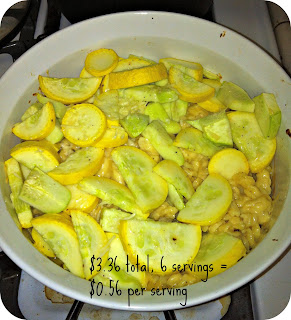 I was so excited when I woke up this morning and I was hungry!  Of course, it was also 5am and G was ready to be up and play . . . why do babies wake up so early?  Anyway, I had some cereal and it went down ok, so then by 10am, I was hungry again and decided to try some chicken soup.  For lunch I had some Alphabet soup (my favorite kind of soup).  By then my insides were starting to feel much better – as you can see by my snack of seaweed followed by dinner of homemade mac n cheese. (topped with squash instead of breadcrumbs)  I don’t think I’ve ever made mac n cheese from scratch before!  It was really tasty, but I definitely want to make a few tweaks to the recipe for the next time I make it.  I will share the recipe with you in a different post as this one is quite long enough already.

As I said earlier, I don’t think the issue with this challenge for me, will be the grocery bill. It will be resisting the temptation to go grab lunch somewhere or stop at Starbucks.  But that’s what this exercise is for, right?  To reign in my current spending, and honestly, eating out is probably my biggest budget weakness.
Posted by Brenda Stevens at 10:02 PM