Guinevere’s first birthday party has now come and gone.  My original intent was to have a backyard birthday party.  I was going to set up the food in our dining room and have plenty of seating outside in the backyard.  I bought a water table for the older kids to play with, and we were going to set up a play yard over a tarp and blankets for the little kids.  However, it was 105 degrees the day before the party and I decided we should just gather everyone inside in the AC instead.  We still set up the water table outside in case anyone wanted to brave the heat.  The only downside to moving everything inside is that the play yard took up so much space in the living room that things felt a little crowded in the house.  But I think everyone had a good time.

Eventually people did move outside and we realized that it wasn’t nearly as hot as the day before.  There was a decent amount of cloud cover, which provided some much needed relief from the heat.  Once people started moving outside, it didn’t feel nearly as crowded inside!  The water table was definitely worth the investment – all the kids loved playing with it.  And now we have it for G to play with for the rest of summer.

The theme for the party was a rainbow theme.  I decided that I wanted to provide mostly snacks and drinks that I was willing to let Guinevere eat, so it was all healthy fruits and veggies.  I was quite pleased with the aesthetic appeal of our snack table. 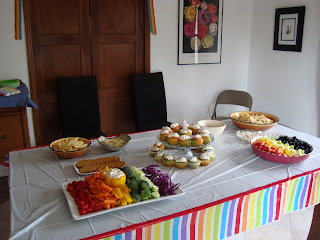 Instead of cake, we did rainbow cupcakes.  I was inspired by the rainbow cakes I kept seeing on Pinterest, but every time I’ve ever tried to do a layer cake, it turns into an unmitigated disaster.  So I decided to try my own version.  I made up a regular boxed cake mix and then divided it into six bowls.  I used food coloring in each bowl and then dropped 1 teaspoon of each color into cupcake liners. 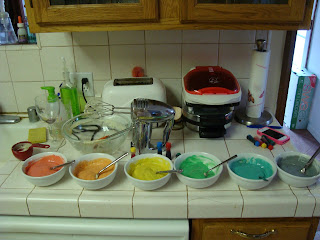 They turned out super fun, if I do say so myself. 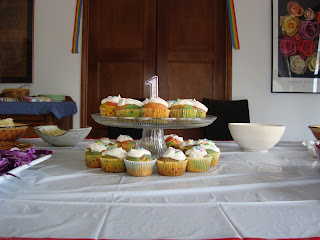 I decided not to do a smash cake.  I’ve seen too many instances of babies refusing to eat any of their smash cake and the whole thing gets wasted.  So we just gave her a regular sized cupcake.  She ended up eating the whole thing!  I was both impressed and scared at the same time!

Considering how much sugar and how overstimulated she was, Guinevere stayed remarkably sweet for the remainder of the day.  She was definitely hyper, but it was a cute hyper.  After everyone left, my parents stayed behind and G showed off her crawling skills and even walked (with assistance) a little.  She even said a couple of words to show off for Grandpa (“Uh oh” is her favorite phrase right now).  All in all, it was a great party and I had a great time . . . is it too soon to start planning for G’s 2nd birthday?
Posted by Brenda Stevens at 10:12 PM

Email ThisBlogThis!Share to TwitterShare to FacebookShare to Pinterest
Labels: birthday