I’ve been teasing about this subject for a while now, but the master bathroom renovation is finally done!  It is so nice to have two functioning bathrooms again!  We have been operating as a one-bathroom house for almost an entire year.

The shower never quite got warm enough – it was kind of like taking a luke warm shower, so we started showering in the guest bathroom, which gets super hot very quickly.  Then there was the toilet . . .

The toilet in the master bath had a suction thingy in the tank that was so tight, it broke every handle we purchased (and we went through several).  So we gave up on even having a handle and you had to remove the lid to the tank and reach in and manually pull up on the suction thing (sorry, I don’t know the technical term for it).  Then we noticed that the toilet wobbled a little when you sat on it.  As a result, the toilet was leaking a small amount of water around the base every time someone used it.  We had a plumber look at it one day (the plumber was over to fix something else), and he told us that the floor underneath the toilet was warped, so even if we were to put a new toilet in that exact spot, it would never sit flat.

Once we decided to renovate the master bathroom, we knew it would have to be a major overhaul.  We gutted the entire bathroom! Everything was taken out and replaced – new tile, new tub, new vanity, new cabinets, etc..  I think the only things that we kept were the towel bar and shower curtain rod!  We added a double sink (it had previously been a single sink bathroom) and moved the toilet over by 6 inches (for some reason, it had been installed super close to the shower.  When you sat on the toilet, the shower curtain would skim your thighs!)

Aaron and I hired a friend of ours, who is a contractor (and has appeared on HGTV’s “Designed to Sell”), to manage the project and another friend of ours to do the majority of the labor.  This way we could keep working and earning the money that allowed us to pay for the project while the bathroom got done. The benefit of hiring friends (that you know can get the job done) is that I was comfortable letting them be in the house while we were not there.  I had so much fun coming home each day and seeing the progress!

And without further adieu, here are the before/during/after shots:

We installed a Kohler deep soaker tub.  We had considered a jacuzzi tub, which would have been amazing!  But after looking at the extra costs associated with it (the tub itself, installation, and maintenance), we decided on a deep soaker.  I haven't yet taken a bath in the new bathroom yet, but I'm really excited to do so!

The tiles are from Lowes, with the exception of the decorative border tiles in the shower, which are from Home Depot.

The new bathroom cabinets are from Ikea.  Our master bathroom didn't have any medicine cabinets before, so we ended up leaving all our toiletries on the counter.  Now we have SO much storage space for everything.  It is fantastic to have a place to put everything and not have to leave it on the counter.

The lighting fixture is from Lamps Plus.  Our contractor installed a dimmer light switch that is automatically programmed to dim up to half brightness if you hit the switch once.  If you hit the switch twice, it goes to full.  Very useful for my middle of the night bathroom breaks! 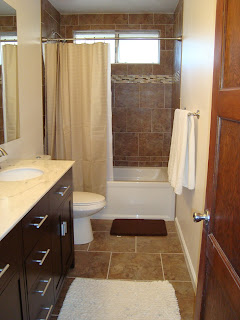 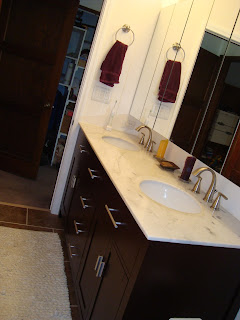 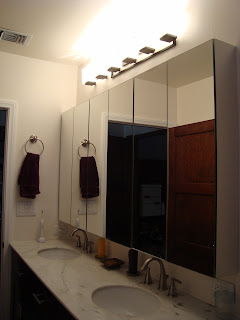 Now we have a “grown up” bathroom!  I have to say, I am very pleased with the result!  The bathroom is so calming and beautiful.

Now we just need to clean up all the construction dust before baby arrives . . . anyone know a good cleaning person or service in the Valley?
Posted by Brenda Stevens at 8:33 AM