Well, here I am in my third trimester now!  It all feels like it’s going by so fast!  I had a slight panic attack last weekend when I realized I have only 3 months left before the little one is here.  But we do have a bassinet and some baby clothes, so if for some crazy reason the baby came out tomorrow, at least we have a place for it to sleep and it wouldn’t go naked.

Today was a very baby focused day.  I woke up early and went to a pre-natal yoga class hosted by ClubMomMe at the PumpStation in Santa Monica.  I am so glad I went to that class!  I feel so much better about myself when I exercise.  Though, I will say that one thing I learned today was not to look in the mirror in an exercise class these days.  My belly looks so big to me!  Fortunately, it seems that (so far), I’m just gaining in the three B’s, as one of my friends likes to call it, belly, butt and boobs.  As long as I can keep the weight gain to those parts of my body, I should be ok.

After the pre-natal yoga class, Aaron and I went in for our 3D ultrasound.  We went to a place called Baby View, which was recommended to us by one of our friends.  3D ultrasounds can be crazy expensive, but this place is pretty reasonable.  We got the Grasshopper package, which was $99 and included a 20-minute session, 12 black and white images, 3 pages of color images, a DVD and a CD of the images. When Aaron and I walked into the ultrasound room, we were greeted by two plush leather recliners.  On the wall was a big screen tv/monitor.  It was a very comfortable, spa-like atmosphere.  The ultrasound tech spread the cold gel on my belly and dimmed the lights.  All of a sudden, an image of a little hand giving a thumbs up came on the screen, and “What a Wonderful World” was playing on the speakers. 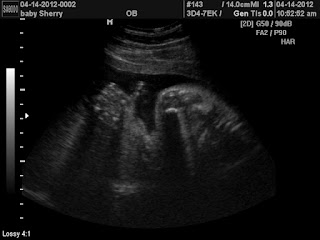 I said to the tech, “Oh great, you’re going to make me cry now.”  Then we all laughed, and it alleviated any tension in the room.  We told the tech that our number one goal for this session was to confirm the gender, since the little one was not being super cooperative in the last ultrasound.  After listening to the heartbeat and seeing some tiny feet and toes, the ultrasound tech did some searching around for the gender.  I had to roll over on my side a little and then we had to poke my stomach a bit to get the baby to move into a position so we could see what we wanted to see.  Finally, the baby moved into the correct position.  While we didn’t get a clear picture to print out, we did finally get confirmation: It is definitely a girl!!!  Now I just need to convince Aaron to let me get some pink stuff.  :)

We also got some fun pictures of the little one’s face: 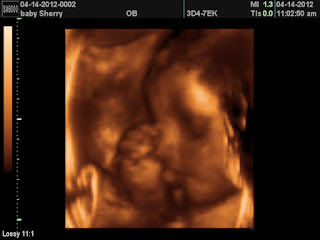 As great as the still pictures are, the DVD was by far the best part of the package – it contains all the moving images that can’t be captured in a still.  You can see the baby’s heart beating, and its eyes blinking, and its little feet kicking!

After the ultrasound, we decided to go to Babies R Us and see if there was anything we wanted to add to our registry.  We still need to find a crib bedding set we like.  Most of the ones we’ve seen so far are either too pink, too “boy” or just too expensive.  So we might end up just registering for some plain sheets and then filling in the rest later.  Babies can’t use blankets anyway, so really all we need are sheets for now.  One thing I find interesting about Babies R Us is how vastly different some stores are than others.  And by “different,” I mean that some are waaay better than others.  The Babies R Us that we went to in Woodland Hills today was really more of a “let’s shove some baby stuff in the corner of a Toys R Us.”  At least the Northridge store is half Babies R Us, half Toys R Us.  The one in Van Nuys is twice as big as the Northridge store and is a dedicated Babies R Us – no sharing with the bigger kids.  Still, the best one I’ve seen is in Mira Mesa, the part of San Diego I grew up in.  It used to be a Toys R Us, and now is solely a Babies R Us.  It has by far the best selection of any Babies R Us that I’ve ever been to – it even has maternity clothes!  After seeing the dismal selection at the Woodland Hills Babies R Us, we decided to go home and do some more research and then add stuff online if we want.

For those of you who would like to see a picture of the bump, here is a picture of Aaron and I last Sunday on Easter. 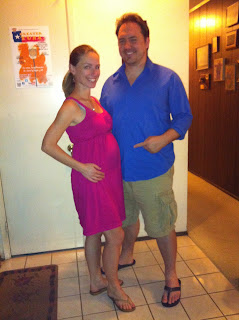