I am now 24 weeks pregnant, which equals roughly 5 ½ months. People who have been pregnant before know exactly what I mean when I say 24 weeks, but many of my friends and co-workers have given me a blank stare after they ask how far along I am and then get the answer in weeks.  I don’t blame them; I was exactly the same way.  The problem is that since there are slightly more than 4 weeks in each month, you can’t just divide by 4 (and if you did, then humans would be pregnant for 10 months, not 9).  I finally figured out how to calculate the months! I am due in early July, so that is month 9, therefore June is 8, May is 7, April is 6, and March is 5.

This weekend I went down to San Diego for a bachelorette party.  Not just any bachelorette party, but one of my best friend’s bachelorette!  (Yep, I will be a pregnant bridesmaid in April.)  Note to self: even though a pregnant lady can’t drink, it might not be the best idea to volunteer to be the DD for the bride for her bachelorette.  It will lead to a fun, but late night out.  I didn’t get in that night until 2:30am!  I can’t remember the last time I stayed up that late.  That’s late even for a non-pregnant Brenda!

We had a really good time, though.  It was St. Patrick’s Day, so all our pictures look very color coordinated – each of us wore green and black.  We started the evening at the Atoll restaurant at the Catamaran hotel in Pacific Beach.  Our plan was to hop on the Bahia Belle boat and then cruise the harbor for the rest of the night after dinner, but the weather Gods were not with us that evening.  The boat was not running due to inclement weather (i.e. it was cold and rainy).  Fortunately, the restaurant manager talked to the concierge to get some ideas for alternate places we could go.  He also comped three of our desserts at dinner for the trouble, which I thought was very nice.

The concierge recommended a place called Beachwood, which is a bar near the water in Pacific Beach.  We asked them to call cabs for us to take us there (that way we could leave our cars parked at the hotel and not have to deal with trying to find parking in PB on St. Patrick’s Day).  But then as we were standing around waiting for the cabs to show up, we realized the bar was only a block and a half away.  It would have taken more time for the cab to pick us up and drive there than it did to walk!

The PB crowd is interesting on any given day, but even more interesting on St. Patrick’s Day.  It’s full of frat boys, sorority girls, and people who were frat boys and sorority girls and never quite grew out of that mentality.  On our way to the bar, we passed 2 guys who apparently decided they couldn’t make it into the bathroom inside, and so were relieving themselves outside.  Once inside the bar, we weaseled our way up to the bar for some drinks.  I bought a drink for the lady of honor.  I will say this, it was weird walking through a crowd.  I’m used to being super small and being able to squeeze through crowds without any problems.  I’m still relatively small and was able to squeeze through the crowd, but I could feel my belly bumping into people as I was doing it.  It felt so weird!  Honestly, my belly bumping into people felt almost more violating than when a guy passed me and purposely copped a feel of the upper region.  I was wearing a padded bra anyway, so it’s not like he felt anything real there.  But I’m not used to my belly bumping into anyone or anything!

I highly doubt that anyone other than me even really noticed the belly in that crowded club.  My bump is now to the point where, in most of my clothes, from the front, you can’t really see it.  Then I turn sideways and BOOM, there it is.  :)

And for those of you who want pictures, here you go: 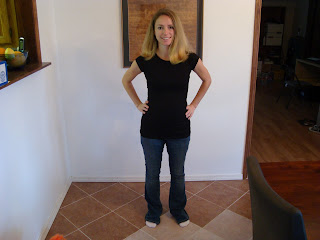 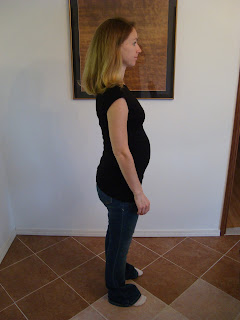 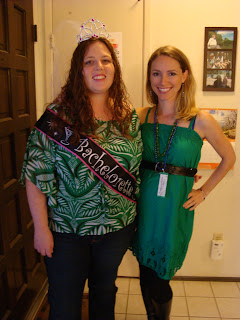 Ready for a night on the town!

My dad also took a profile pic of me in that green dress, but I don’t have that picture (hint, hint, Dad, I would like to see that picture.)
Posted by Brenda Stevens at 8:34 AM