On Monday we had our 18-week ultrasound.  It was at 8am, because that is most conducive to our work schedules.  So we schlepped our tired selves to the doctor’s office – me without the ad of any caffeine.  The whole way there, Aaron was complaining that there was a “6” on the clock when he woke up (he got up at 6:59).  We checked in at radiology and sat down in the waiting room.  The radiology waiting room is definitely different than the OB waiting room.  It’s not nearly as warm and inviting.  Though the nurse who checked us in was very nice, the other people in the room didn’t seem nearly as happy to be there as the women in the OB waiting room tend to be.  However, we didn’t have to wait for long.  I will say this about Kaiser, if nothing else, they certainly don’t seem to make you wait around very long.  I have yet to finish more than 3 pages in my book every time I bring it to the waiting room with me!

Once called in, we were shown to the ultrasound room.  Apparently the way Kaiser does ultrasounds for low risk pregnancies is that an ultrasound technician administers it and then the doctor reviews the images and goes over the results with us.  I think we got a little spoiled at our last ultrasound.  Because there was such a time crunch on it, they sent us to a private, high risk, doctor, so it was a doctor administering the ultrasound and he was able to tell us everything he was doing as he was doing it and reassure us that everything was fine.

Today, the tech told me to lie down and then she squirted warm jelly on my belly and started doing the ultrasound.  I couldn’t see anything on the screen because of my angle.  All I saw were grey blobs.  I kept trying to crane my head to see, but all that resulted was a headache at the base of my neck.  The tech was super quiet for the first 5 minutes or so.  All she said was, “Let me know if I’m pressing too hard.”  Finally I couldn’t take the silence any longer, and I asked if everything was ok.  That’s when she informed us that she couldn’t actually tell us if everything was ok because it was the doctor’s job to review the pictures and go over everything with us later.  But of course, the one thing (aside from knowing our baby was healthy) we had been excited to find out today was gender.  We had already been asked three times that morning if we wanted to know.  So now I was afraid that the tech wouldn’t even be able to tell us that.  I asked if she would be able to tell us gender today and she said, “Yes, but I haven’t been able to see it yet.”

She asked us if they were able to see the gender at the NT ultrasound.  Here’s a little piece of info that we hadn’t made public knowledge until now.  The doctor at the last ultrasound told us it was a girl, but he also said it was really early and not to go buy a bunch of pink just yet, to wait until we got confirmation at the 18 week ultrasound.

Finally, after much poking and prodding, the tech at this ultrasound said, “It does look like it’s a girl.”  But she didn’t say it definitively.  As you know from my last post, I want things for sure before I count on them.  But, like the tech said, it’s never 100% sure until the baby comes out.  We definitely did not see any boy parts during the ultrasound, but the baby wasn’t being super cooperative.  It had its legs together and straight out – like a lady would do.  J  I think we are sure enough that it’s a girl to start focusing on girl names (though still keeping our list of boy names just in case) and we will probably start calling it “her” occasionally.  And, if it turns out it’s a boy after all, that’s ok.  As long as it’s healthy, that’s all we really care about (though it would be really nice to be able to decorate the room with my old pointe shoes).

We finally got the ultrasound tech to open up a little and start chatting with us as she was taking all the pictures she needed, which helped to ease my mind a bit.  Then she turned the screen so I could see.  We got to see the heart beating again, and saw the arms and the hands and the legs.  The best part of all was seeing the baby move!  Its little arms were flailing all over the place!  And based on the position the baby was in, those “gas bubbles” I was feeling last week, were definitely not gas bubbles after all.

Here are some of the pics: 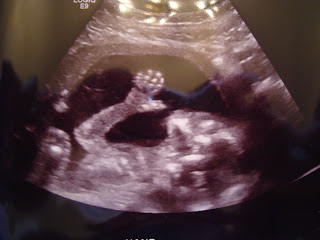 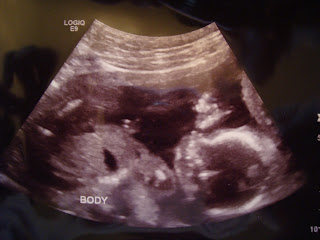 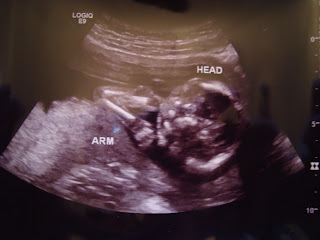 Like I said, we got spoiled at the last ultrasound with the clarity of the pictures.  This was my first over the stomach ultrasound, and this is more what I had always expected ultrasound pics to look like: grey, blobby, and alien looking.  But I really like the first one, where it looks like it's waving - you can see all the bones in her hand!
Posted by Brenda Stevens at 7:31 AM