Sorry I missed a blog entry last week.  I think the baby must be going through a growth spurt or something.  All week last week, it was almost like being back in first trimester with the hunger and the exhaustion!  It felt like no matter how much I ate, I was always hungry, and no matter how much sleep I got, I still would fall asleep on the couch by 9:30pm.  Hopefully this week will be a little better and I will be a bit more productive.

We have some long-term houseguests arriving this week, and I really hope that I can be a good host, and not just the “pregnant lady who does nothing but eat, sleep and work.”  One of Aaron’s college roommates is moving from NYC to LA with his girlfriend and baby, so we are letting them stay with us until they find a place out here.  They will be staying in our guest room/future nursery, which means I have to move all the baby stuff we’ve already acquired before they get here.  Fortunately, the timing works out pretty well so that I’m not freaking out too much about not being able to set up the nursery yet.  After all, we still have almost 4 months left.  Holy moly, I have less than 4 months left!!!

Ok, let’s talk about daycare.  This is one of those subjects that has caused me some freakoutage (yes, I just made up that word.)  Unfortunately, due to our location, we need to start looking for daycare NOW.  Los Angeles is one of those cities where people will sign their child up on a wait list for daycare while the kid is still in the womb (and sometimes even before they are conceived).  We’ve heard horror stories from friends who got stuck by waiting too long to sort out daycare (and by “too long” I mean waiting until after the kid is born), and I did not want that to happen to us!  Seriously, I had one friend who started looking while she was still pregnant, and she’d call up daycares and they would ask her if she was already pregnant, and they would say, “You’re a little late to the game.”  Fortunately, I haven’t experienced anything that extreme yet.  However, I am glad we are starting now because I have encountered several where they only have wait list availability now, but by the time we will need to start using daycare, they will have openings.

We are looking at daycare in both Santa Monica (where I work) and the Valley (where we live).  Let me just say, Santa Monica daycares are crazy expensive!  There are several daycares that have amazing sounding programs, with all organic food, teaching the kids languages doing arts & crafts and all kinds of fun stuff . . . average price: a little over $2,000/month.  Back when I was a starving actor, I used to live on less than $2,000 a month!  The cheapest daycare I’ve found in Santa Monica is $1,300/month.  The downside to the “cheap” Santa Monica daycre: it has numerous spelling and grammatical errors on its website.  Is it bad that I judge a daycare for things like spelling and grammatical errors on their website?  I won’t even wait for you to answer that question.  The answer is “no.”  Here’s why: these people will be in charge of teaching my kid in her most formative years.  If my child doesn’t get a good foundation in the basics, how will she succeed in life?  I did find one daycare in Santa Monica that I really liked, and it wasn’t nearly as expensive as most of the other daycares in the area (not the cheapest in the area either, but at least there were no grammatical errors on its website).  It’s a French immersion daycare, run by two native French speakers, and they primarily talk to the children in French (though, obviously, they do speak English to the kids and parents also).  They were very quick to respond to my inquiry, and very nice when I spoke to them.  However, they don’t take kids under 10 months old.  They did offer to put us on the wait list now, so that when our kid is old enough, they are that much higher up on the list.  How LA are we?  Our unborn child is on a wait list for a French immersion daycare!

Yesterday, Aaron and I took a look at a daycare in the Valley.  It’s 10 minutes from our house, on my way to work, half as expensive as some of the cheaper daycares in Santa Monica, and they take kids from newborn – 5 years old.  I think the main difference in price is that this daycare is run out of the owner’s home v. it being a daycare center.  So the “facility” is significantly smaller than the centers in Santa Monica . . . because it’s a house.  It seemed nice, though.  The owner said that she usually separates the infants from the older kids for the most part, and they split the day with the infants inside in the morning and the kids outside, and then they’ll switch.  She said that all the infants get play time/tummy time, and when she feels they are ready to join the older kids, she’ll switch them to the “preschool program.”  She teaches them English, Spanish and French.  She has about 10 kids and 4 adults (3 helpers plus her), so that seems like a decent ratio.  All her helpers (one of them has been her mother-in-law) have been working with her since she started the daycare 13 years ago.  She cooks all the food she serves to the kids, and doesn’t give them sugary treats, which was important to me.  In fact, she said that if a parent brings in cookies or something for a kid’s birthday, she’ll package them up and then give them to the parents when they pick up their kid.  That way if the parent wants their kid to have a cookie, they are the ones to give it to them . . . and if you don’t want your kid eating a cookie, you can just not give it to them.  Also, she says they do not watch any tv during the day.  One of my big concerns about an in-home daycare (vs. a center) was that I had heard from other friends that every in-home daycare they visited, there was a tv and it was always on.  I don’t anticipate being a strict anti-tv parent, but I would like to try to limit tv time, especially when they are young.  The owner gave me the phone numbers for a couple of current parents, so I am going to call them to get their impression of the daycare before we make a final decision.  We’re definitely going to continue to look around, but it is nice to know that there is a place near our house that is affordable, has openings when we will need it, and seems like a good place.

One last note to finish up, I don’t usually get ooey-gooey, but I just want to brag about my awesome husband for half a second.  Since I got pregnant, he’s been really good about bringing me flowers “just because.”  These are the flowers he brought me Friday night. :) 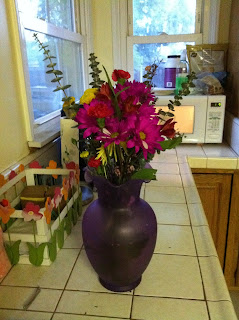 Posted by Brenda Stevens at 9:22 AM